I've been feeling lately that what I share of my personal world on this blog is not all that fleshed out, because although I'll briefly mention my family members, I've hardly talked about them as *individuals*.  I'll just say that I went downtown with Emi, or had a conversation with my dad, but neither of those things says much about who I'm actually sharing my life with!  So I decided to do a bio of sorts on each family member.  My apologies if this isn't the most fascinating subject ever (I mean, *I* think they're fascinating, so maybe you will too! ;-)), but I want to give more of a background on my life, so I plan on having the links to each family members 'page' on the sidebar once I've written them all (they'll probably be spread out over the next couple of months).  A neat list of those people (animal people included) most important to me.  But enough with introductions.  Or maybe not.  Just a different *type* of introduction... 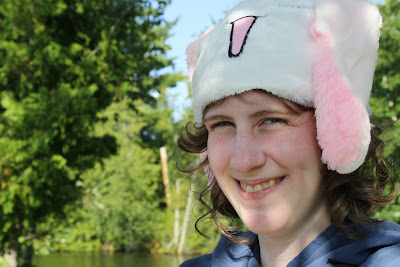 She's a self proclaimed Otaku, one obsessed with manga, anime, and Japanese culture in general.  She loves to "cosplay" (dress up as characters from a manga, anime, or even video game), and adores going to the annual Montreal anime convention.  In full cosplay, of course. 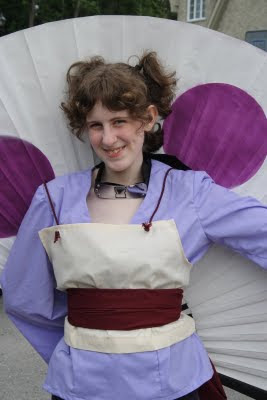 She's also learning to speak Japanese (she'll greet and say goodbye to people in Japanese a good portion of the time, and regularly decides to confuse her poor family and friends by throwing in random Japanese words and phrases into normal conversation), and plans on visiting Japan in the next couple of years.  She says that in her learning of the Japanese language, she's come to understand the intricate workings of the English language better, and to really gain a whole new respect for the power of and beauty of language.  Oh, and have I mentioned that she loves Japan?  Yeah.

Emi is a writer, and a good one at that.  She's been doing writing "role-playing", where two authors collaborate online to create a story, scene by scene, since she was something like 10 years old, and thus has written hundreds of thousands of words of fiction.  That's her main form of writing, but she also occasionally writes non-fiction in the form of really good responses in online debates and discussions, has recently developed a love of poetry, especially haiku, and has turned out a couple of haiku that I really like, though she's more critical of them (unsurprisingly).  She also tackled NaNoWriMo this year, and finished victorious on November 29th (one day before the deadline!) with 50,014 words. 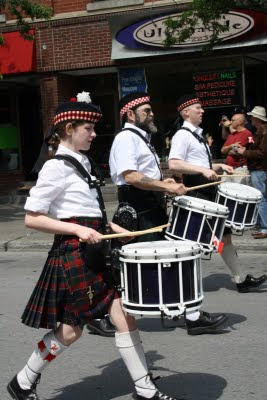 Emi has been playing the snare drum for four years now, and the highland snare specifically for two years.  She goes to drum lessons once a week at a pipes and drums school, and drum practice once a week with the pipes and drums band she belongs to, that does paid gigs I might add.  She earned her first money ever for playing drums just a couple of weeks ago! 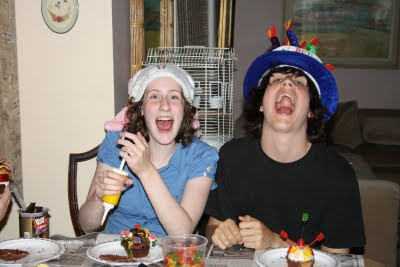 I should also mention that Emi has a crazy non-biological twin named Trevor.  They decided they were twins last year (he's the cute twin and she's the smart twin), and like to do similar things, wear similar clothes, claim each others mother for their own, and say all personality traits that they have in common are thanks to their shared DNA.  They even fight like siblings! ;-)

She also has three adopted big brothers, one of whom she's actually informed of this fact. ;-)

In case you were wondering, Emi is 16, and unlike me, with my half a year of kindergarten, has never been to school a day in her life.  She's probably the best in my family at arguing in favour of unschooling, because unlike me, she's pretty good at not putting people on the defensive.  Obviously, sometimes that reaction can't be avoided.  But when it can be, she'll usually manage to!  She's just generally good at debating, as well (usually issues of unschooling or green anarchy, since those are the two most contentious things she's likely to talk about).  She argues both logically and calmly.  She just doesn't usually get ruffled or angry, and if she does, she hides it well!

Most importantly to me, Emi is my best friend.  We talk late into the night about things both vastly important and deep, and things merely gossip worthy.  We argue over which guys are cute or not, people watch together, talk about our shared love of writing, about human behavior, about politics and religion and a million other things...  I'd seriously be lost without her!

Oh, and I have to mention that she also loves art, loves spending time on the online artists community deviantART, and loves making plushies.  Check out her dA account here!

And that is my introduction of Emi.  In case you didn't gather it from what I've written above, she's a majorly cool person.  Friendly, talkative, loyal, intelligent, fun and funny.  I think I'm pretty lucky to have her as a sister, personally!

Posted by Idzie Desmarais at 4:40 PM