Quizzing is For School, Not Life

Ah, quizzing. People in any type of formal education are probably familiar with the official kind, the test kind, but for the crowds of homeschoolers and unschoolers especially, we learn early on to dread the questions coming as soon someone finds out you don't go to school. "What's 8 times 8?" "What's the capital of China?"

There's an easy way to separate quizzing from plain old asking of questions, and it's this: 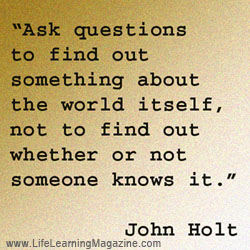 Questions asked in curiosity, asked because you want to know the answer for yourself, is the way a question is generally best asked. When you instead quiz someone, ask them a question you know the answer to just to see if they know it, too, it becomes something entirely different. It becomes an attempt to assert yourself as smarter, more accomplished, superior. An attempt to bump yourself up higher on the perceived knowledge hierarchy. Anyone who, as a child, has had another child ask "do YOU know what that means?" or had an adult bend down and with the greatest of condescension ask them a question that adult most certainly already know the answer to, knows just what that looks and feels like.

You'd think that it would end as an adult, though, wouldn't you? That adults would at the very least treat other adults with enough courtesy to not quiz each other unless invited to. Yet that obviously isn't the case, as I've learned. It happens sometimes still because of unschooling, such as when, a year or two ago, someone tried to ask me a math question upon finding out I hadn't gone to school. And at an unschooling conference a couple of years ago, my sister (then 18) got in a conversation with a family staying in the same hotel who weren't part of our group, where as soon as they discovered what type of conference was going on one promptly asked her a question about physics. She doesn't tend to let herself be pushed around, so responded simply "I don't think that's usually how you introduce yourself to someone you've just met." The quizzer was embarrassed, and his family apologized, commenting that "he's a teacher!" which I suppose was supposed to convey that he just couldn't help himself. Yet more frequently than that rude quizzing from complete strangers, I think it often happens among people who do know each other, by individuals who just don't think about how condescending their queries are likely to sound.

Last spring, I was happily telling a friend who's very into wild edibles and wild skills about how I'd been harvesting and eating fiddleheads, and the first thing he said was "how did you know they were the right species?" taken aback, I explained that they had the correct groove in them. "Other non-edible ferns have that too." still feeling rather off balanced, I added that they also had the correct papery bits, at which point he nodded, satisfied.

I was left feeling angry and hurt though. The lack of respect for my judgement shown with that question, to think I'd eat a wild food without feeling confident in my identification, was insulting, and that someone I considered a friend thought nothing of quizzing me was rather hurtful. I recognize it was likely coming from a place of concern, and when friends do this I'm sure there's no bad intention behind it. Yet it still ends up coming out badly!

There are appropriate times to quiz people, of course. Times when you've entered into a relationship where you expect that from someone: you've accepted someone as a teacher or mentor for a specific subject, you're attending a workshop or class, or you've asked a friend to quiz you on a particular set of knowledge you're trying to get to stick. That's the type of quizzing that's actually helpful and beneficial.

But if someone hasn't asked for it, that's it. Just don't, no matter the age of the person you're tempted to quiz. Instead, save questions for when you don't know something, and want to know more. Ask questions out of curiosity and fascination and excitement and a desire to learn more. That's what questions are meant to be all about.
Posted by Idzie Desmarais at 1:11 PM