The Importance of Solitude: When Socializing Isn't All It's Cracked Up to Be

One of the greatest sources of so called “concern” when it comes to school-free learning is “socialization.” It often seems that at least 50% of the questions we get asked as home-learners boils down to “but what if they don’t have any friends?”

There’s plenty of rebuttals out there--I wrote a long one a while back myself--but I find myself wanting to explore a different counter-argument, and that’s whether or not we really need as much of this socializing thing as many folks seem to think…

Firstly, I’d like to be clear about what I am--and am not--talking about.

The word “socialization” carries some heavy baggage, and though the Merriam-Webster dictionary definition is--for the most part--pretty innocent, in regards to homeschoolers specifically the word has come to signify something more like “assimilation” or “obedience to authority,” with “what about socialization?” being quickly followed by “how will they learn respect for authority?” and ”how will they learn to stand in line??” Not really what most unschoolers, at least, are going for.

So instead I’m speaking of socializing, “to talk to and do things with other people in a friendly way,” according, once again, to the good old Merriam-Webster.

That’s what we want, I should think! But, then comes the big question: how much of this do children really want, or need?

I can’t read in the Doctor’s office. And I have to say, I love to read. I read very quickly. I have been reading lots very quickly for over 15 years. And yet, surrounded by rustling bodies and quiet conversations, buzzing cell phones and names being called, I can read the same paragraph a dozen times over and still be entirely clueless as to what, actually, I just read.

In the simplest, most “education”-oriented way, being surrounded by lots of other people makes it quite difficult to focus for a large percentage of people. Whether I’m reading a novel, or learning about the chemistry of lacto-fermentation, or figuring out how many cans of paint I need to fully cover my bedroom walls, I need a calm, quiet environment to truly focus on what I’m doing. That’s been the case all my life, and while I’ve enjoyed learning some skills with others (choirs and dance classes and the like), French class and history class (taken by choice through a local homeschool co-op) were far from successful.

Some people have no trouble focusing when it group settings. For others, though? It’s nearly impossible.

Energy in, energy out

We’re all familiar by now with the “introverts” and “extroverts” model, and while I’m definitely part of the crowd that questions the accuracy achieved when making two broad categories and attempting to fit the whole, complicated mass of humanity into one or the other, it at least provides a good starting point. Because some people do mostly find they gain energy (or recharge) when by themselves, while others generally feel they gain energy by being with others. Still other people recharge best with a select few people for company; ambivert socializers might find how and when they recharge to be entirely dependent on context...

Which is really just a long way of saying that there are a whole lot of people who find spending eight hours a day, every day, surrounded by people to not be the best match for them.

As an example? Me. I love spending time with people! But not for too long (I start to feel drained); and not in noisy and bright and busy environments (a side effect of a mental illness I’ve struggled with since early childhood is the experience of “sensory overload,” which can cause me to basically shut down, lose all focus, and find even the simplest of decisions very difficult).

I might be a more extreme case, but the fact remains that for many people, spending a very large portion of their childhoods surrounded by whole classrooms worth of other children is not their ideal situation.

When people fuss about school-free learners and our supposed lack of socialization, what they’re often really saying is that they fear children will be isolated. And it’s true, that’s bad! And to their credit, I have met home learners--often from either very rural (aka isolated) areas, or those whose families believe that their children should only interact with people of the same religion as theirs--who ARE isolated. However, those are generally the outliers, and furthermore, school doesn’t really provide a successful solution.

It’s not the solution because, as I think all of us have experienced at least a couple of times in our lives, it’s quite possible to feel completely alone when surrounded by dozens of people. Along with isolated home learners, I’ve met people who felt profoundly out-of-place in schools, who lacked friendship and support and a feeling of belonging every bit as much as those isolated homeschoolers. And in my experience, there exist a lot more lonely children in school than isolated ones outside of school.

To me this problem goes beyond education, and seems likely a result of a culture which does its best to shut children away from the real world--effectively isolating them--leaving even school-free learners sometimes struggling to break into the communities around them.

Not only do we all have different needs when it comes to how much time we spend with others, but also what type of socializing we like to do. Some people love big groups and parties, others prefer smaller groups or one-on-one interactions. Some people want to do things with friends: attend a pottery class or have a Risk night. Others just want to quietly play together as children, and just hang out and talk as adults. Many people want all of these things, in varying proportions.

Unschoolers are learning the ways in which they function best in the world--with the help of supportive adults--which means they’re learning how and what they want to learn, and they’re also learning how to build a healthy social life for themselves, which first means figuring out what IS a healthy social life for them!
It’s not often thought of in those terms, but a one-size-fits-all education system also encourages a one-size-fits-all social model, that leaves many children feeling lonely, or drained, or pressured to be who they’re not and do what they don’t want to do. 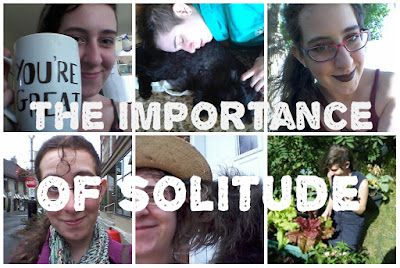 Being alone feels like having time. Time to think, to process, to daydream, to plan… In a culture where both children and adults spend the bulk of their time in school or at work, arriving home exhausted and drained, too many people of all ages are missing out on the true benefits of being alone.

Instead of fearing unschoolers aren’t receiving the necessary amount of socializing, perhaps we should be worried that the majority of people aren’t getting enough time by themselves.

Yes, we are social creatures. But we are also complex creatures, infinitely variable in both our inner and outer lives, with vastly different needs and desires. We all need both solitude, and time with people, but the balance tips in different places for each of us. As Paul Tillich said:

And if we can let go of the fear of our children being alone (or being alone ourselves), and work to embrace the glory of solitude, we could probably all do a better job of creating social lives that actually meet our needs.

Do you like what I have to say on the topics of unschooling and self-directed learning? Consider supporting me on Patreon.

Posted by Idzie Desmarais at 7:14 PM