People just discovering unschooling often have a lot of questions. How do unschoolers learn what they need to? Do schools really have the right idea in dividing everything into separate subjects? And can unschooling really work for every individual? My short answers would generally be lots of different ways; no; and every child can unschool, but not every parent or situation is compatible with unschooling. However, I really think I need to go a bit more in-depth with those answers…

When you really start immersing yourself in unschooling, you start to see that, barring any learning disabilities, it's easy to absorb all the basics from everyday life. Sometimes it can be helpful to observe just how seamlessly those subjects are being learned, even though eventually, you probably won’t think of learning as being broken into subjects at all!


When an unschooler wants to gain higher proficiency in any of these things, they can dive into researching something they’re interested in, find mentors or teachers (with parental help, depending on age and what the learner wants and needs), and take online classes or in person ones (at a homeschool co-op, college, or offered to the wider community). After all, unschooling simply means self directed (adult facilitated) learning. It doesn’t mean you have to eschew all structure, it just means that the learner should be calling the shots (in partnership with supportive adults in their lives).

As you gain greater comfort with the unschooling lifestyle, you start to find that breaking everything down into distinct subjects--and trying to find or create learning in every moment--is extremely limiting. Reading is writing is history is art is geography. Learning is in large part the process of making connections, following the threads and seeing where they lead, what they intersect with, and how they affect each other. When we try to set firm boundaries between various subjects, all we do is impede those connections, restraining and interrupting the natural curiosity and desire to build an ever more complete picture of the world and our place in it. If we’re going to call anything “education,” perhaps it shouldn’t be about schooling at all, but instead about our continuous process of building and re-building that picture, looking at it from different angles, adding and subtracting from it as we learn and grow and change.

Learning is such an endlessly complex process, that to try and break it up into firm subjects seems almost absurd. 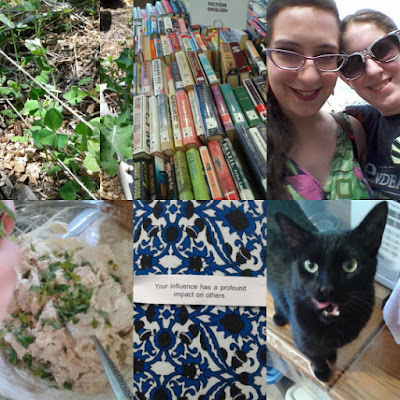 Everyone is born a self-directed learner

A lot of time I hear those who have limited familiarity with unschooling say that this type of learning helps children “learn how to learn,” and my reaction to that is always that everyone knows how to learn! Children need supportive people in their lives, circumstances that allow those people to invest the time those children need, and access to resources, but if you have those important elements, everyone is capable of unschooling. Obviously, those circumstances can be hard to find in our capitalistic culture, where many people just don’t have the financial ability for a parent or trusted adult to stay with children. My point isn’t to minimize that, just to point out that humans are built to learn, that we all have the innate abilities needed to do so, and that while external factors might get in the way, if the circumstances are right then we’re ALL unschoolers.

ALL children, you say? What about children with learning disabilities, or neuro-atypical children, or other children with special needs? It’s the job of an unschooling parent or guardian to help their children gain the skills and find the resources they need to achieve their goals, which can absolutely include specialized tutoring, therapy, support groups, or other services. Remember: unschooling is all about self-directed learning, cultivating learning partnerships between children and their parents/guardians/mentors/teachers, and using a variety of resources as wanted and needed. The nature of unschooling means that each learner’s “education” will be completely different, and can bend and adapt to the unique needs of everyone involved.

So there won’t really be a collection of subjects that every unschooler studies. There won’t be one standardized body of learning that every child has. But when it really comes down to it, the world is a very big place, and each person can only ever hope to learn a fraction of what’s out there to be learned. It seems to me that the best we can do is accept that fact, and work to support each individual in living a life and creating an “education” that feels meaningful to them, and equips them with whatever skills they need and want.

We can look at how various subjects are learned in different unschoolers lives, we can use examples to explain how it works to prospective unschoolers and naysayers alike, and we can comfort ourselves in the knowledge that we (or our children) are learning some of the same everyday skills that children in school are (supposed to be) learning. But in the end, it would probably do everyone a whole lot of good if we stepped away from the idea that everything can and should be broken into subjects, and that every individual needs to learn the same things in each of those subjects.

Learning is too big for that, and it makes a whole lot more sense to just take a deep breath and enjoy the ride!
Posted by Idzie Desmarais at 12:36 PM 3 comments:

In the early hours of this morning, a man with an assault rifle walked into a gay night club and opened fire. After a several hour standoff with police, it ended in his death, as well as the deaths of at least 49 LGBTQ people who were partying in a place where they thought they were safe. Over 50 people were rushed to hospital, meaning the total death toll is likely to rise.

Over the coming hours and days, news outlets will be rife with speculation, as the investigation continues and new facts emerge. Already there’s lots of talk about it being an act of “Islamic terrorism,” with none of the news outlets seemingly capable of focusing on anything else. I know that, regardless of what the shooter’s religion was, I won’t be blaming Muslims, or people of any other religion, as the impetus behind this horrific massacre. The shooting occurred at a gay night club, during Pride Month, in the early hours of the US celebration of Pride Day. This was a hate crime, targeting a minority that, despite the progress made in the last decades, continues to face incredibly high rates of violence, especially the most vulnerable among the LGBTQ community (queer people of colour, trans women and especially trans women of colour). It’s not surprising to me that the largest mass shooting in the US since 1890 targeted LGBTQ people.

The blame might not lie with any religion, and I fear greatly for the repercussions Muslims, including LGBTQ Muslims, will face in the coming weeks, as once again a huge population is blamed for the actions of a single person. But the blame does lie with more than just the single shooter: it lies with a culture of homophobia and transphobia, and with every single non-LGBTQ person who with their words and actions contributes to a culture of violence against myself, and everyone else in my community of LGBTQ people.

I live in a country (Canada) and a province (Quebec) where it’s better for LGBTQ people than plenty of other parts of North America. Better, but not good. Trans people have to run a bureaucratic gamut to change their legal markers, and face a tremendous amount of transphobia from a frequently ignorant or even hostile medical establishment. All LGBTQ people still face homophobia from society at large, in popular media, in schools, in homeschooling groups, in almost every group not specifically designed for LGBTQ people (and sometimes even in those groups) that you can find. In times when I presented in a more gender-bending way, I had people on the street yell at me about my sexual orientation. LGBTQ friends have all been harassed in greater or lesser ways.

Violence always exists on a spectrum. At the extreme, it manifests as the largest mass shooting in the last 100 years of American history. But leading up to that exists a wide range of acts that nurtured that shooter. I blame everyone who’s ever sneered the words “faggot” or “dyke” or “tranny.” I blame every person who ever talked primly of “those people” with their “unnatural lifestyles.” I blame every parent who ever told their children that gays were “sinners.”

Because it all starts with parents. The choices you make, the attitudes you model, the words you say, they shape the future. Your words can be the difference between a child who knows they are loved unconditionally, and a child who hates an essential part of who they are with such horror and disgust that they kill themselves. Your attitudes can be the difference between raising a child who embraces their friend when they come out, and raising one who buys a semi-automatic weapon and opens fire in a crowded room filled with strangers they genuinely believe deserve to die.

Or maybe it won’t be that extreme. Maybe they’ll simply be the kid who sends me a message online telling me I’m going to hell. The one who calls my friend and his boyfriend faggots.

Parents don’t have all the power. Our culture is homophobic, our culture is transphobic. We will be affected by this, every single one of us. A young queer person with the most loving and supportive of parents can still feel that there’s something wrong with them because of their sexual orientation. The straight teenager raised by parents who always spoke positively about LGBTQ people can still learn it’s okay to use the word “gay” as an insult.

You don’t have all the power. But you do have such an important role to play in helping create a more just and loving world.

When I read the news earlier today, I sat and cried. Those people who were murdered early this morning, almost 1,500 miles away, were a distant part of my adopted family. I haven’t been able to get this imaginary image out of my head all day, an image of a dark bar, dozens of bodies scattered across the floor, screaming and crying and a bone deep terror I pray I never get to feel. I’m heartbroken.

And I’m begging you, please, no matter what religion you follow, to stop contributing to this violence. You might think your words are so far removed from this horrific act as to be entirely disconnected, but you would be wrong. Your words build on the words of others, your actions pool with those of your neighbors, your family, your friends. Isolated ideas gather strength as they join with others, building momentum until they are laws allowing health care practitioners to turn away a gay man having a heart attack so he can die on the streets; they become pastors preaching damnation; they become a transgender girl shunned by every age mate she knows for the way she dresses and the name she asks to be called; and they lead to the death of at least 50 innocent LGBTQ people who just wanted to celebrate Pride.

Please, be a voice not just for tolerance, but acceptance, and support. Speak up, stand up, raise up powerful LGBTQ voices, and work to end every tragedy, big and small, perpetrated every day against our community.

I want everyone to do better. Because I never want something like what happened in Orlando, Florida, to ever happen again.
Posted by Idzie Desmarais at 5:13 PM 11 comments: