Continuing my experiments in cooking with dandelions, I decided to try this recipe, shared by Gen, author of the guest post on suburban gardening, for fried dandelion blossoms.

First, you collect the blossoms!  Dandelion stems are very bitter, so you cut off all the stem, leaving only the flower (plus green flower bit/thingy underneath it, so that the flower holds together!).

Then, rinse the blossoms in lightly salted water. 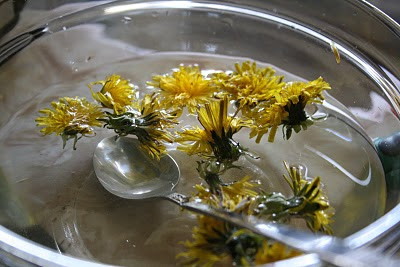 Pat them dry on paper towels. 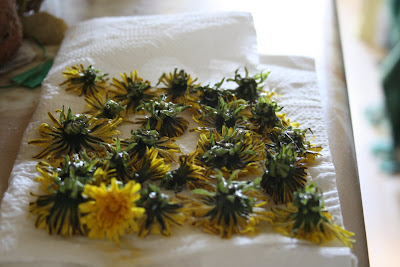 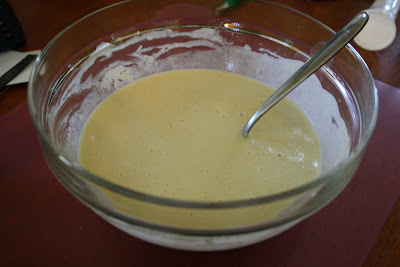 Then dip the flowers: 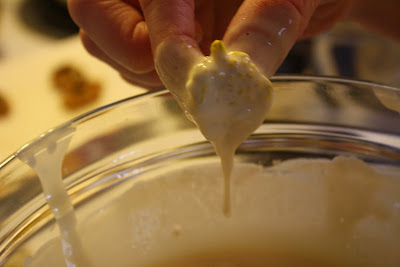 And fry them in hot oil!  We didn't *quite* put enough oil to make them deep-fried, but you do need a fair bit of oil. 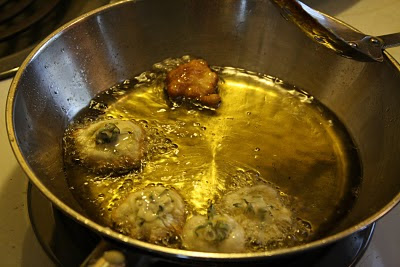 Blotting off any extra grease is always important when frying things, I find. 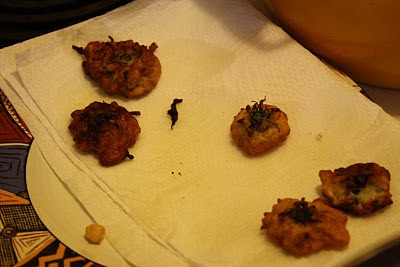 Annnnd here is the finished product!! 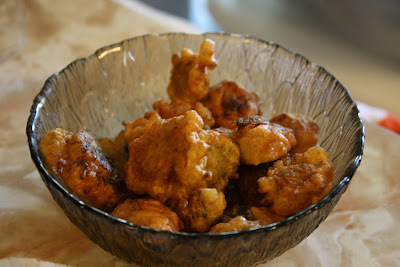 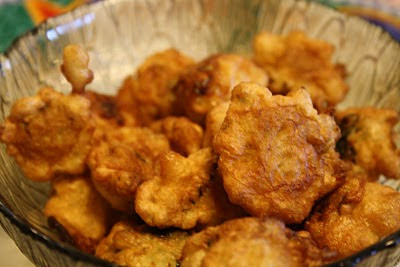 They were great!  A lovely, fluffy texture and simple but good flavour.  We didn't feel a need to put anything on them, and just ate them plain!

I really want to get more into foraging this year.  I'm starting out with one of the most easy to find plants, dandelions, but we've had our wild edibles plant books out a lot lately, and have taken more out from the library.  On walks we've been identifying edible plants, and I think we're going to start taking a book or two with us on walks, to figure out what the plants we can't easily recognize are...

Far beside the fact that I think finding and growing your own food is a MUCH better way to do things than buying stuff from a supermarket, I just find it immensely fun.  I'll gleefully dance around outside, gathering yummy food, and have been more involved so far this year in gardening than I've ever been before.  I love cooking, and I find I also really, really love being part of the growing and/or finding process in the food that I cook.  I'm looking forward to many gardening and foraging adventures this summer...

"What Do Unschoolers DO?"

One of the most common questions that I see being asked around the internet after the lousy segment on Good Morning America, that only focused on what unschoolers *don't* do, is quite simple: "what do unschoolers DO?"

I live my life.  For most people, the concept of "education" being a separate part of life is so ingrained that they can't see things working any other way.  But for me, and for other unschoolers, learning really is nothing more or less than living my life as fully as I can.  Life and learning don't have to be separate things.  As I wrote a while ago, "Learning IS living, and living IS learning, so why differentiate between the two? If I'm living, I'm learning, and obviously if I'm learning, I'm living!".

"I am learning all the time. The tombstone will be my diploma." -Eartha Kitt

And I'm quite happy with that, thank you very much.

Email ThisBlogThis!Share to TwitterShare to FacebookShare to Pinterest
Labels: About me, education, life, life learning, unschooling, unschooling in the news, words

Unschooling Gets Publicity...In a BIG Way!

If you're an unschooler, or a homeschooler, or interested in alternative learning, and are even *slightly* involved in any of those communities online, you've most likely heard about the Good Morning America segment on unschooling.

Unschooling has been moving steadily into the mainstream awareness in the last few years.  I've seen a marked increase in people talking about unschooling since I started paying attention to that type of thing a few years ago.  But never have I seen this level of attention.

In case you haven't seen it yet, here is the ridiculously biased, negative, and over-edited segment that appeared on Good Morning America yesterday:

I didn't even finish watching it the first time I tried to.  I just kept cringing at how horribly ABC was slanting things, and just imagining the reactions it would get...

Sure enough, if you read just a few of the 830+ comments on this piece, you'll see just what I was afraid of!  There are multiple lovely unschoolers commenting positively in the comments section, but there are also a huge amount of ignorant, uninformed, and downright nasty comments.  I always attack schools, never people who go to, or went to, school, but even if I did think schooled people were "losers" (discounting the fact I don't think life is about competition, and don't believe you either "win" or "lose", PLUS know a large amount of seriously awesome schooled folk), I can't imagine ever making such vindictive and cruel comments!  Why do people feel a need to do that??  Do they feel better in their mediocre life choices if they can believe firmly and with great smugness that there are people out there who chose MUCH worse paths in life than they did...  Is it because, if they admitted that there were better, more joyful ways of living life, then much of their own life has been wasted?

Today the Bieglers, the family in the first clip (whom I've met, though don't know well.  What I have seen of them has led me to believe that they're intelligent, kind, and caring people!), where given a chance to speak briefly live on Good Morning America, without all the editing.  It was MUCH better!!  They were articulate, passionate, and just did a great job.  I wish they'd been given longer to speak.

Sadly, I'm afraid the feedback from the general public was just as negative.

The first video was on Yahoo homepage (not sure if it still is?).  Twitter and blogs are abuzz with talk of this new-fangled thing called "unschooling" (I keep patiently pointing out to people that it's not new at all!).  I have never seen this much attention paid to unschooling before.

And I have to say, it's kind of scary.

Suddenly the masses are being exposed to something that challenges everything they've always taken to be The Way Things Are (and The Way Things Should Be).  Many people don't seem to be reacting well.

The Bieglers are going to be on the Joy Behar show on CNN tonight, so you might want to tune into that.

Several unschoolers have written great responses to ABC's portrayal of unschoolers, so I want to share those:

P.S. I'm going through old blog posts and comments and putting together an Unschooling FAQs page...  I figure I've answered so many questions, I should gather it all in one place to make things easier!
Posted by Idzie Desmarais at 3:50 PM 26 comments:

I'm thrilled to present the first ever guest post on this blog!!  In this post, Genevieve shares her adventures in being part of the Food Revolution, also known more simply as having your own veggie garden! ;-) I give you:


My Suburban, Backyard, Food Revolution...Sort Of
I think the fact that I live in the suburbs (of Montreal) still surprises me, even though I’ve been here for almost 6 years. I’ve always felt strongly about issues regarding the environment and peace, but most recently, and perhaps most of all, food. I mention this because suburbia never seemed like the place I could live with a clean conscience with regards to the environment and food. But after university and living in and around downtown for four years, I needed green space (read: yard), clean air and wanted to be closer to the schools where I would be teaching (another story altogether).

So after buying a house and spending time making it our own, we (my partner and I) thought we should spend some time on the yard. So how do you ‘green’ suburbia? Slowly we got rid of some of our lawn, planted perennials and built, drum roll please...raised vegetable beds! For me, it felt like a revolution was happening in my own backyard. I felt empowered and I was really going to stick it to the proverbial ‘man’. However, that first year, the vegetable garden wasn’t quite the picture of success we had imagined (we really didn’t know what we were doing), though we did harvest tomatoes, beans and lots of various lettuces. In subsequent years, we varied the types of seeds we sowed and focused mainly on heirloom and organic ones. Thankfully, our harvest has been slightly better every year since.

Then, almost 2 years ago, I got pregnant with not one, but two wee ones. So, as you can imagine, last summer’s garden was virtually non-existent (the kids being about 6 mths old at the time), though I did plant an apple tree to commemorate the birth of our lovely babes. Having kids has reaffirmed our need for good organic home-grown food, and the need to get rid of more lawn to grow that home-grown food (not to mention the positive environmental implications of growing your own stuff). We have plans to build a cold-frame using reclaimed (we are proud trash-pickers) to extend the growing season. There is also the dream of owning some chickens and goats and moving to a larger piece of land one day, to expand on this dream of ours to be more self-sufficient. This year we’ve planted or started indoors, so far, 7 varieties of tomatoes, lettuces, sunflowers, melon, peas, broccoli, onions, okra, cabbage and eggplant. If all goes well (and space allows for it) there will be many more seeds planted when the soil warms up.

I wish I had the time to dig up the entire yard and care for it in such a way that I could grow food year-round and feed all of us almost exclusively on what I grew, but that is not realistic. The temperature doesn’t allow for that and neither does time. So, we grow what we can, on the land we have time to till. At this point, we’re not saving that much money by growing some of our own food, but anyway, I don’t think that’s the point. Honestly, I think what I love most of all, is that I know HOW to grow food. That, to me, is just amazing. Maybe the second best thing is that, one day, my kids will know that potatoes grow in the ground and cucumbers on vines, not trees J

So, what is everyone else planting and what are your reasons for claiming parts of your yards for food? Are your motivations political, environmental or romantic perhaps? What does your food revolution look like?

Thank you for this, Genevieve!

If YOU have something you'd love to write about (or make art about!), something cool you want to share, I strongly encourage you to submit it to the DIY Life Zine.  It's a project I'm really excited about, and I'm so looking forward to seeing all the great stuff people come up with for it!

Beatrice from Radio Free School is doing a series on unschoolers who decide to pass on "higher education", and asked me to answer a few questions.  It reads in part:


"Going against the middle class/mainstream entrenched belief that to have a successful life you have to get higher ed can you define your idea of what success means?"

To me it's quite simple: success to me means nothing more or less than being happy. I find it pretty hard to comprehend how EVERYONE can not see this! Nothing really matters if you're not happy, or working toward finding a place in your life that brings you happiness.

The entire interview can be found here!  Beatrice is looking for other stories of grown unschoolers who are choosing/chose not to go to college or university, so if you want to share your story, drop her a line at radiofreeschool@gmail.com.