The long wait is over: the first ever issue of DIY Life Zine is now available!!  For anyone who's just anxious to see it right away, I'll cut to the chase.  There are a couple of ways you can read it. 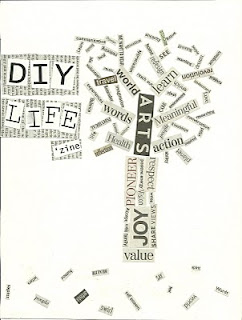 If you like what you read, I'd be thrilled if you shared the link on Facebook, Twitter, or your blog.  You can also print it out and photocopy it as much as you want: hand it out to your friends and family, leave it lying around in a bus stop or at the library...  Or not.  I'm just being optimistic and saying all the cool things you *can* do if you want to. ;-)

Some random notes about the zine:

Firstly, I want to thank everyone who contributed SO MUCH!!  You guys made this project a success.

Secondly, I originally planned on having a cooler layout: more of a gritty, zine-y feel to the whole thing.  However, life and procrastination got in the way, so it's not quite as nice as it could have been.  Sorry about that!

In terms of language, I received some pieces with Canadian spelling, some with American spelling, and for the most part, that's how they were left.  Also, my proofreader flaked out on me partway through, so I'm blaming her for the typos I'm sure are there! ;-P

I'm sure there's so much more I could say about the zine, about the process, the content, the everything, but right now I'm just feeling frazzled and brain-fried, so I'm going to leave it at this!  Oh, wait, one more thing: I'd love love LOVE to get feedback, so if you read it, I'd be very happy if you left a comment or sent me an email (open.eyed.slave@gmail.com) to let me know what you think, what you liked and disliked, suggestions for ways to do things better in the future, or anything else you can think of.  Thanks a bunch!!

EDIT: I used the wrong version of one of the poems in the original version, which is why if you click on the link now, it says "revised version". :-)

Review of For The Sake Of Our Children

For The Sake of Our Children by Léandre Bergeron, translated by Pamela Levac

Léandre Bergeron comes from an interesting background: born in Manitoba, educated at a Catholic school in the hopes that he’d one day become a missionary priest, and eventually becoming a teacher, his rebellious nature led him to put all that behind him and move with his wife to rural Quebec. It’s there, on their homestead, that his three daughters were born, and there that the story truly begins.

Léandre shares, in the pages of a journal he kept for a year, his daily life spent with his three teenage daughters, the flowing rhythms of their days that move with the seasons. He shares memories of the past, stories of raising his daughters from the time they were babies, stories of their business (a health food store), the circle of life on their farm... He also shares his very strong opinions on childrearing, education and schooling, and the processed lives so many people live in this modern world. His words are insightful, his writing poetic and flowing, and thus this book was a joy to read. I found it interesting that in most books on unschooling, I find myself nodding in agreement with pretty much everything, whereas in this book, my opinions where more mixed. Much of the stuff he has to say I agree with fully. But there was a fair bit that made me pause, and seriously consider my stance on the matter. Not for anything huge, just at small points throughout the book. This, I believe, instead of taking away from the experience, actually added something to my reading of this book.

I did find myself wanting to hear more about the *entire* family, mom included, because she was mentioned only briefly throughout the book. However, most of what I’ve read on unschooling seems to be like that, only usually it’s entirely from the mother’s perspective. Just one parent’s interactions with their children, not how their family works as a whole, so that isn’t really unique to this book. That said, I found it a very pleasant change to read a book, talking about hands on attachment parenting and unschooling, not just the theory, written by a father. That subject seems to be covered almost exclusively by mothers! I also really liked that this book was about a family in my home province (and current residence!) of Quebec. The translation was great, as you’d never know that it was originally written in another language from reading it, yet at the same time the book felt very *Quebecois*!

Definitely a good read, and a good addition to any book collection on attachment parenting, sustainable living, unschooling, or homeschooling.

A brief description of the difference between relaxed homeschooling and unschooling

I love this description by Ren Allen of the difference between relaxed homeschooling and unschooling (found on Sandra Dodd's page on the subject), so I wanted to share it!

"....How are relaxed homeschoolers different from unschoolers? In my brief searches, they seem to be very similar. ..."

They are and they aren't.
I've been both so I feel qualified to answer this.:)

When I was the eclectic/relaxed homeschooler my focus was still about making sure we were doing "educational" types of activities. Yes, we did mostly hands-on fun stuff the kids liked, but I was still seeing it as a way to touch on "science" or "history". We DID have a lot of fun but sometimes we'd hit walls where the kids didn't get all excited about something I planned and it made me all grumpy.

Not the best atmosphere for learning. I couldn't see that the video games they were fascinated with were more valuable than the homemade solar cooker I had planned.;)

I was always the most hands-on, relaxed parent of EVERY group we ever belonged to. I really wish we'd run into some real unschoolers earlier in the journey because I think it would have been a fairly easy transition from an academic standpoint.

The part that is missing with the relaxed/eclectic approach is still trust. It's just being more creative with how you get information into children,that's all. Better....but not quite the complete trust that unschoolers have in the human ability to learn.

My family started off as relaxed homeschoolers as well, then drifted into full-fledged unschooling, and our experiences sound so much like Ren's!  Right down to our always being the most relaxed family of every group we attended.  And it would have made a big difference in our journey towards unschooling had we met other unschoolers earlier on, as well...  That's one of the reasons I'll happily answer questions over email and hang out with any new unschoolers who want to connect with families who've been doing it longer, as well as meet older/grown unschoolers who can be the "proof" they need that unschoolers do not have two heads. ;-) The other reason being that unschoolers are generally really great people to hang out with! :-)

Peace,
Idzie
Posted by Idzie Desmarais at 2:38 PM No comments: