Finding Balance in a Plugged-In World

This post was originally published on Patreon, a crowdfunding platform which allows people like you to make a big difference in my life by pledging $1 or more a month. In exchange, you receive perks like an extra post per month (among other things!). Most of those posts will never appear anywhere else besides Patreon, but occasionally I like to share an older one here as well. I hope you enjoy!

In the ongoing discussion of technology, its usage, and what is and isn’t appropriate for children, something that frequently comes up is balance. I shared a quote recently that I really liked by Zina Harrington that touched on just that:

"We have to stop pretending that we can 'unplug' our children. Technology is an integrated part of our kids' world--and it will continue to be throughout their lives. We need to change the conversation. Instead of restricting screen time, we need to teach our children balance in a world where technology is abundant. We must shift focus and introduce them to the concept of mindful usage."

I want to first discuss just what balance means, because too often what someone means when they say balance is “someone doing things the way I think they should be doing them.” There are some things all humans ideally need to feel and function best: food to fuel our bodies; physical movement and exertion of some sort; sunlight and outdoors; access to intellectual pursuits and exploration; places that feel safe; enough sleep; time for leisure and relaxation, daydreaming and calm; human company and support and community… But the ways those needs are met, the limitations and opportunities dictated by each person’s body and mind and environment, and the quantities needed to satisfy each individual will vary wildly. Your balance isn’t my balance. Your balance isn’t necessarily your child’s balance. 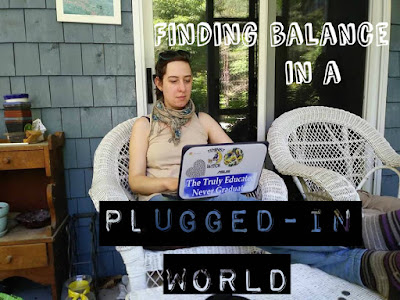 So when I hear words like “mindful usage,” I’m cautious. I like the idea, if what it really means is helping a child figure out what’s right for them. I don’t like the idea if it’s just another euphemism for parents making their children do whatever they think is best for them, working on their children instead of with them.

What mindful usage can mean, to me, is adults working in partnership with children to help them decide how they want to engage with technology. This can happen by teaching important safety practices; by creating family/community cultures that embrace a range of different activities on and off screens; by prompting children to listen to what their bodies are telling them; by having open and honest discussions about the benefits and drawbacks of various activities; by modeling a thoughtful relationship with screens (talking about what you enjoy doing on “screens,” and also when and why you choose to take breaks or do something else)… And yes, it can definitely be the job of a parent to intervene when there is an actual, serious issue. But not to preemptively control, just in case your children might make “bad” decisions, or because you think their explorations are different than what you would choose yourself, to stop them in their tracks and never let them find their own rhythms.

I’m always cautious to point out that I’m not a parent: the ins and outs of how to parent respectfully, from the point of view of a parent, are better left to others. Instead, the perspective I try to speak from is that of someone raised with very few screen limitations, and someone who now seeks to place all of my writing in the context of children’s and youth rights: their rights to, within reason, make their own decisions about the way they spend their time, the things they choose to focus on, and the mediums they choose to use. I don’t think there’s only one answer, one way of doing things, but I also think that any answer that shuts children out of the decision making process when it comes to their own lives is a faulty one.

If balance is truly the aim, then that’s less of a static goal, and more of a constant query, a touchstone of daily life: how does this feel? Is anything off? If so, what needs to change? It’s a collaborative process, not something that must be imposed from above.

Children definitely don’t need to be “unplugged,” and instead technology can be an integral part of a well balanced life.

Related posts: In Defense of "Screens", Summer Rules?, Why Some Learning Isn't Better Than Other Learning: Television and Books Through An Unschooling Lense.
Posted by Idzie Desmarais at 3:42 PM 2 comments:

The History in Historicals: Learning Wherever Interest Takes You

I spend a lot of time talking about how ever present learning is, and how learning doesn’t have to look like schooling in order to be valuable. I also believe that fun and leisure are perfectly good pursuits all on their own, whether they lead to learning or not (and they almost certainly will, anyway).

But I also think it can be helpful every now and then to discuss examples of learning that looks “educational,” found in places that may be unexpected.

In the last few months I’ve been reading what’s certainly the most maligned of the broader historical fiction category: historical romance. People like to make snide comments about “bodice rippers,” and disapproving comments about what sort of people would read such “trashy” non-literature. Yet I’ve been not only enjoying the genre immensely, but also learning a lot. Shocking, I know! While books within the genre range from quite thoroughly researched and historically rooted to what’s perhaps best described as anachronistic, they’ve all lead to a whole lot of historical fact gathering. Thanks to my friend Google, I’ve been looking things up multiple times for every book I read, seeing what is and isn’t accurate, figuring out when exactly a story is set, and falling down rabbit holes in pursuit of more details about a particularly fascinating event or topic.

An incomplete list of things I have looked up and learned something about in the past four months of romance reading, in no particular order:

When (and where and for whom) wigs were fashionable; the British political party of the Whigs; the various “eras” in British history and where they start/end/overlap (Georgian, Regency, Victorian, Edwardian); the evolution of bustles and bonnets; the Peterloo Massacre and the Six Acts; the Cato Street Rebellion; the Corn Laws; history of condoms from earliest examples to mass production; bloodletting and the theories behind it; when the link between hygiene and infectious diseases was first made; what railway surgeons were; history of “sodomy” and other anti-gay laws in the UK, France, and North America; Regency era sex clubs; British nobility, all the ranks and rules around titles and courtesy titles; the differences between various horse-drawn conveyances; Mary Wollstonecraft and the Vindication of the Rights of Women; history of epilepsy and treatment of epileptic people; the anti-slavery sugar boycotts of the 18th and 19th centuries...

Even the staunchest supporters of learning-that-looks-like-schooling couldn’t find fault with studying history, and all of this gaining of greater understanding of the United Kingdom in Georgian through Victorian eras is thanks to the humble historical romance novel.

Constant curiosity, the drive to look things up, discuss and consider, is in large part an innate human quality… Though it can, of course, be discouraged and suppressed. Even when that’s the case, cultivating a practice and lifestyle of curiosity can be done, by paying attention to those sparks, the ideas or comments or facts that our brains get snagged on, and seeing where it goes. It helps not to put pressure on yourself to make a passing interest into something it’s not: a passion. There’s no need to force it, just follow it for as long as you’re eager to do so, and veer off down a different path when the mood takes you. Unless you have a specific reason for sticking with something past that point (and if you do have a compelling reason, go you!), there’s no need to do so.

I’m quickly becoming almost as enamored with historical romance as I’ve been of fantasy fiction for the last 15+ years, and novels in general definitely merit a passionate interest rating from me. But my online historical fact-finding missions don’t usually go very deep: I’m content to know important dates and make connections between different political events and movements without feeling a need to check out six books on the appropriate topics from the library. What’s important to me is that I keep on reading what I like to read, researching where curiosity prompts me to do so, and just enjoying going wherever life learning takes me.

Related reading: Passion Without Purpose, Why Assigning Books or Reading Time is a Bad Idea, Fun is More Important than "Education," and for Patreon backers only How to love what you love, (mostly) guilt free.
Posted by Idzie Desmarais at 5:16 PM No comments: