Regulating Unschooling? Only If There's No Testing Involved

As unschooling in particular and homeschooling in general become ever more widespread, the rumblings of unease from everyone not unschooling (or homeschooling) also seem to get louder: wait, why isn’t there more oversight? These families could be using this as a cover for educational neglect. Shouldn’t someone be testing these kids?

Ah, testing. Again and again it comes up as an answer to better controlling the homeschooling population. After all, isn’t that the best way to compare school free learners to those in school, and make sure they’re getting a real education?

It makes sense. If, that is, you believe that testing is an accurate judge of education… And that’s increasingly being called into question not only by fringe groups of educational radicals, but by ever more mainstream groups of people--teachers, parents, children, and concerned citizens--who see how increased standardized testing is harming learning and stressing children to the point of illness. The “opt-out” movement has gained traction across the US, and in it’s New York epicenter the last several years have seen over 20% of students refusing to take standardized state tests. In countless op-eds and articles educators, parents, and students expound on the flaws and failings of our mass cultural reliance on standardized testing.

If testing itself is failing in schools, institutions built by their very nature to standardize education in order to test it’s supposed efficacy, then why on earth would it be a good idea to export standardized tests to school free learners, as well? 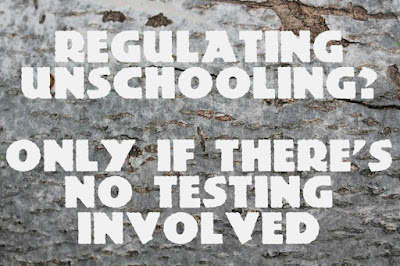 The reason people choose to forgo schooling is because they want a different type of experience, one they’re not able to achieve in a traditional school setting. While some homeschoolers will re-create the trappings of a school education outside of the institution, many more (unschoolers most of all) are looking to leave schooling itself behind, believing that our modern method of education largely ignores the importance of self-directed learning, free play, internal motivation, building respectful multi age relationships, authentic work, and all the other marvelous benefits available to a child with supportive and available adults in their lives. When life and learning are inseparable, testing seems like an absurd intrusion on a natural process.

But how do you know they’re learning? critics cry. Well, that’s actually pretty simple. Firstly, a lack of curriculum doesn’t mean a lack of (learner chosen) goals, whether stated or not: to be able to read well enough to enjoy getting through Harry Potter; to go to space camp; to learn Japanese. Secondly, when not being taught to the test children will engage in authentic and clearly visible projects and activities: planting their own garden; writing a novel; building a video game. Thirdly, and most importantly, when engaging in adult supported self-directed learning there are strong relationships formed between adult and child, and the adult(s) sees the learning happening: in enthusiastic discussions; activities practiced together; books read aloud and shows watched together; in narrations of whatever was done in science club/book club/Scouts/4H/art class/martial arts, etc. When you live and learn together with children, you can’t stop seeing the learning happening.

This isn’t to say I’m 100% against any regulations of school free education. I’m just against any regulation that takes the model of schooling as an unquestioned success, and deems anything different to be suspect. I understand that self-directed learning seems strange and unmeasurable to many, and in all fairness it usually is unmeasurable and is sometimes strange (depending on your definition)! And I can understand fear of school free learning being used as a “mask” for child abuse, at least in that I’d hope that we all want children to be safe and happy, and would be concerned at anything we think might not support that. But in looking to regulate home educators, I think there are some important things to consider (and here I take inspiration from what my province’s largest secular home education organization is recommending to the Quebec government as it prepares new legislation):

In a world where education is--ever so slowly yet ever so surely--becoming more diverse and more individualized, school-free education is going to keep on growing. I think it now falls on those of us comfortable speaking out about our experiences to share them, and those who worry to truly listen, and begin the process of questioning their assumptions about education. Standardized testing in elementary and high school levels has never and will never be an accurate method for establishing whether authentic learning is happening, even inside of schools, and unschoolers as a whole want no part of it. Unschoolers seek to work with children, instead of against them, and perhaps it’s time the rest of society to take a page from our playbook and start working with educational alternatives instead of shutting them down. I have great hope that, with the progress alternative education ideas have made just in my lifetime, real change isn’t only possible, but inevitable.

If you like what you see here, please consider supporting
my work by becoming a Patron!

Posted by Idzie Desmarais at 2:55 PM No comments: