It seems for many, quite possibly most, people, going into a new situation/group can be rather intimidating.  Perhaps especially for something like an unschooling conference, where you really care about being part of that community, learning more about that lifestyle, and meeting others who are following a similar path.  I've heard from a few people that they were worried they'd feel out of place, and from a few people who *did* feel out of place at their first conference!  I was worried about this, too.  And I've felt out of place as well.  But not anymore!


My first ever exposure to other unschoolers was Not Back to School Camp in September of 2008.  I was pretty nervous going there all alone, and when I arrived at the camp, there were what seemed like hundreds of people rushing around and yelling and hugging and being exuberant.  I just wanted to find a little hole to curl up in!  I got a cold nearly instantly, I felt pretty miserable and shy, and kept mostly to myself, so the week was kind of rocky.  It was only on the last day I realized that I had actually managed to make a couple friends, despite how much I'd hid in a corner!
Five months later, in February 2009, I went, along with my mother and sister, to the Unschoolers Winter Waterpark Gathering.  It was the first conference we went to!  Aside from a handful of people I'd met (but not hung out with much) at camp, we knew no one, and I found it pretty nerve-wracking.  There also weren't many people near my age, and although I'll just as happily befriend younger folk individually, I feel pretty out-of-place in groups of younger teens, so I kind of bounced between different people, older and younger, for much of the time.  I enjoyed a lot of talks, and *did* make friends with a few awesome people, though! 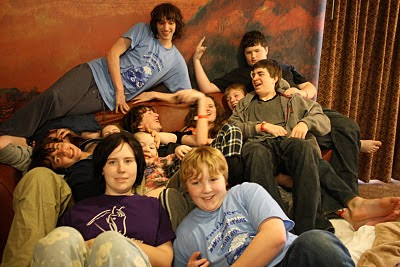 The Northeast Unschooling Conference in August 2009, was the last gathering were I felt out of place at all.  I really still felt like a newbie at first, and was really shy, but I quickly started to have a good time, got to know people whom I'd previously met better, and made new friends (that sounds strangely young and cute...  "I made new friends, mommy!" ;-)), and ended up having a really wonderful time!  By the end of the conference, I didn't feel like an outsider anymore. 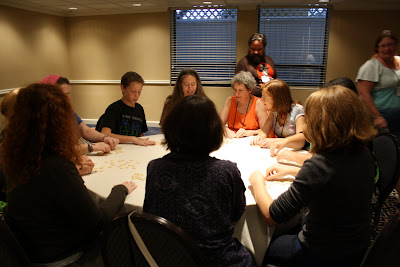 Not Back To School Camp followed shortly after, in September 2009, and it was awesome!  When I arrived, to all the same yelling and hugging and exuberance as the year before, I was surprised to find I wasn't intimidated at all.  I cheerfully greeted people, new and old, chattered happily, and just felt really relaxed.  I kept waiting for the OhMyGawdI'mInAGigGroupIWannaHide thing to hit, but it never did!  I knew at least half the people there, at least by sight, and I got to know a ton of really awesome people that week. 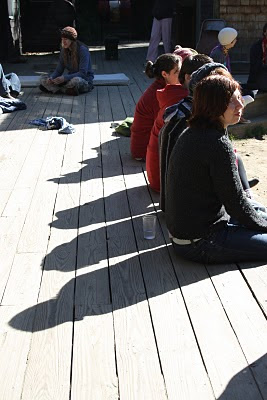 For this years Unschoolers Winter Waterpark Gathering, it's been great feeling like we're really a part of the unschooling community!  A couple of people offered to share a suite with us (it didn't end up working in either case, sadly), and people have asked us if we're going to be there, because they want to see us.  We've asked if various people are going to be there, because we want to see them!  I'm looking forward to seeing old friends, and meeting many new ones.

Really, the point of all this is just to say that, to start with, going to unschooling events can be a scary proposition.  It's easy to feel like an outsider, easy to be shy, and easy to think everyone there has known each other forever (which often isn't true!).  But it really doesn't take long to no longer feel like the new guy/gal!  You'll undoubtably meet great people, and it really is a wonderful community to be a part of.