Now, how to write about this? I have a mild head cold, so my brain feels rather stuffed up and slow, yet I don't really want to put off writing about NBTSC because I'm sure too much of it will slip past my mind if I wait too long! I don't want to write about it in a chronological way, as I have with the conferences I've been too, so I'll try something different... 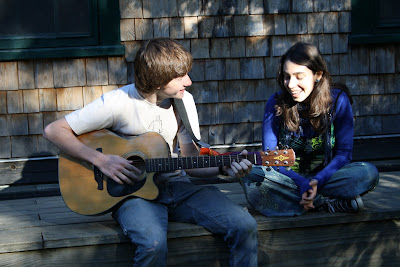 To start with, as you'll know from my earlier posts, I wasn't looking forward to NBTSC all that much. I felt like I may have been getting sick, and like camp, perhaps, wasn't right for me at this time. However, from the moment I got there, things were vastly better than I'd thought they'd be! I knew a huge portion of the people there, so instead of being overwhelmed by all the people rushing around, I was cheerfully greeting old acquaintances and friends and happily talking to new folk as well! It amazed me that I genuinely wasn't feeling very shy... I didn't feel like hiding in a corner, or only talking to people I knew well. I was quite happy conversing with those both new and old! So the week got off to a good start in that way. And the getting sick bit I'd worried about didn't happen. :-) Also, we were put into our advisee groups that first evening (advisee groups are groups of about 10 campers and one staffer who meet daily to check in about how they're feeling, play games, or just generally do whatever they want within that group), and the staffer for my group was actually the person I was hoping I'd get after reading the staff bio's on the NBTSC website!! He's a green anarchist, and just a totally awesome guy all around. So that was really cool. :-) Also, I simply loved my advisee group as a whole! The people were awesome, and it was just a really nice atmosphere. 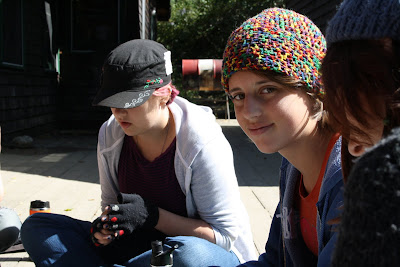 The first night was fucking COLD! That wasn't so cool. I slept badly, was really sore in the morning, and although I was fine in the daytime, that second evening was the worst I felt in terms of mental well-being the whole week. I wasn't really homesick, but I sure as hell was warmth-sick!! However, my mom had dropped off extra blankets around supper time on the first full day (she was staying at a local campground for a couple of nights) so despite my worries that I'd have another horrible night, I slept just fine. :-) 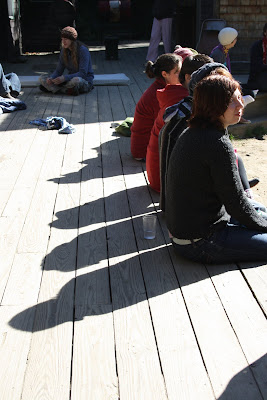 From then on out, the week was just great! I had some wonderful conversations about anti-civilizationism/green anarchy with multiple people, listened to a very interesting debate about anti-civ stuff between other people, had conversations about freeganism, nontraditional paths (i.e. not going to college and/or getting a normal job), unschooling, politics, and a ton of other awesome things. I love the fact that at camp, Monsanto is a bad word, and that if I made some comment dissing corporations, mainstream media, government, or similar, it was practically guaranteed that at least one or two people who heard would instantly jump in with agreement! That freedom to state my opinions openly felt really good. Now, that doesn't mean that most peoples opinions were as overall... extreme(?) as mine, just that I found common ground with many people. I have to thank Julie for her Utopia workshop, and Mike for also being a green anarchist, because those two things made me brave enough to openly talk about my views, when usually I'm not willing to in big groups since I *know* everyone will disagree vehemently and I'll end up feeling bad! After that first time, being open about my views was much easier for the rest of the week. :-) 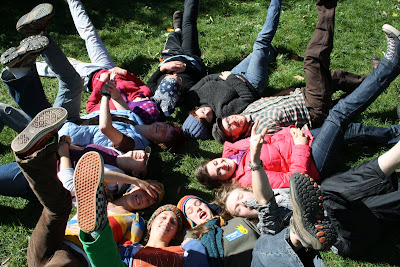 I also just really felt that I made a lot of good connections with people. Some were small connections, with people I never really talked to, but we'd always share a smile. Others I felt a really strong connection with, whether or not we talked much, or simply spent a lot of time with each other! That felt really good. And I really, really want to keep in touch with people. I also think that anyone from camp who's ever in the area should come visit me. ;-) 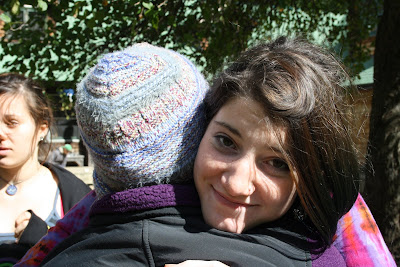 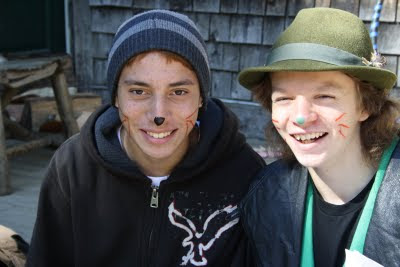 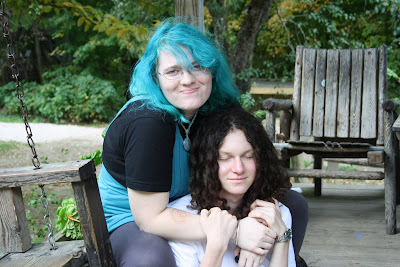 Oh, and I also exercised a lot more than I usually do. I was up and down the rocky hill to my cabin multiple times a day, and also went on a great but quite difficult hike (up the side of a mountain. The view from the top of the trail was incredible!), canoed out to a rope swing and swam (now that was tons of fun but damn, that water was COLD!), and just generally wasn't nearly as much of a couch potato as usual. :-P Something I'm actually missing already about camp (besides the people, which is a given) is the amazing, healthy, 100% vegetarian food! So. Good. 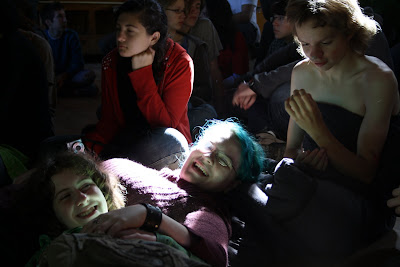 So yes, NBTSC was good this year. I still don't really feel like it was *life-changing* as such, but it was certainly good. I befriended amazing people, had some great times, and yeah, it was just generally really *good*. :-) 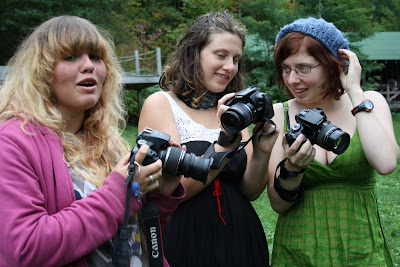 Now, remember how I said I managed to stay healthy the whole week? Well, on Saturday when my mom picked Emi and I up from camp, I felt fine. However, not long into the drive home, my throat started feeling scratchy. Talk about timing! So I do have an actual cold now, but so far it's mild (*knocks on wood*) so I'm not overly bothered. I'm just hibernating for a few days while I get better, and then I'm going to go out into the world! :-) I do feel inspired in some ways, and I've committed myself to making some changes in my life. Many fairly minor, one or two more major. And, well, I'll just have to see how that goes. :-) 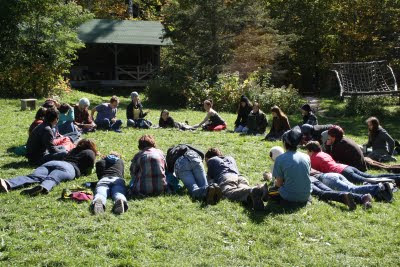