Grown Unschooler Cheyenne La Vallee: "Everyone has it in themselves to be passionate and motivated. " 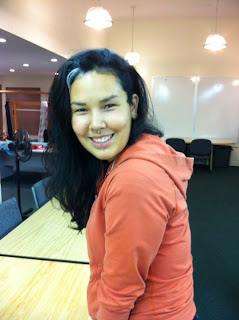 I am a Skwxwú7mesh-Kwakwaka’wakw youth from British Columbia. I have been raised in the Skwxwú7mesh (Squamish) community of Xwmelch’stn (Capilano) in North Vancouver, but my ancestry also comes from the Kwakwaka’wakw nation on northern Vancouver Island. For the past year, I've been working with my brother, sister and other community members to revive our culture, our language and traditions. Specifically the work I've been doing involves urban agriculture, community gardens and traditional plant knowledge.

When did you become an unschooler?
I became an unschooler when I read Grace Llewelyn’s the Teenage Liberation Handbook at 13 years old and then left school shortly after. But honestly, everyone is born with the abilities an unschooler has, it just gets beaten out of us after a few years of schooling and consuming mainstream media. Everyone has it in themselves to be passionate and motivated.

How old are you now?
I’m seventeen years old.

If you chose to leave school, can you talk a bit about what led to that decision, and how the actual process of leaving went (how did your parents, friends, teachers, etc. react? What were the challenges you faced, and how did you overcome them?).
Around the time I left school, my mother became an elected official in our community and I was beginning to pay attention to the conversations that were going on around me, as well as in the world. I began to become aware of the common ideas or notions I was being told throughout my life were not true at all, so when my brother handed me the Teenage Liberation Handbook one afternoon, it was like another piece of the puzzle. It was also the sanest idea I ever heard!

Not everyone agreed, especially not my mom. She gave me an ultimatum, back to school or get a job, which never came into effect. I faced a lot of resistance from older family members and friends’ parents. It was hectic in my relationships afterwards, which is understandable; it was incredibly abnormal. I was 13 years old and no one could persuade, threaten, or bribe to go back to school. I had a strong will and was choosing for myself what kind of life I wanted to live. In retrospect, I probably would have approached people differently.

What do you think the best thing about unschooling is?
To unschool is to live. That’s it plain and simple. It’s to feel the fire in the belly and your mind explode; it’s to sit in the living room on a snowy night with a cup of tea while reading your favourite book until wee hours in the morning. It’s to wake up at 5 am to watch the sun rise and then go back to bed. It’s having that stranger sitting beside you become your best friend for the next hour. It’s going on a crazy adventure to listen to your favourite author talk in the next city. It’s volunteering at the art gallery or anarchist bookstore. Its life: anything you want it to be.

What do you think the worst (or most difficult) thing about unschooling is?
In the beginning of my unschooling journey, I had many questions (what, where, how) and no tools to find the answers. I also had very little support or understanding from the people I needed it most from. Being shut down after trying to bring up the idea really makes one feel hopeless, especially when I was doing it mostly alone.

What jobs/ways of earning money do you, and have you, had?
My first job was an anti-oppression, arts-based employment-training program, being offered by this youth-run, arts/media centre. After that, I worked for a local community garden, mainly taking care of the garden, weeding and planting, but also asking questions whenever I could. The last job I had been with a non-profit, Environmental Youth Alliance, as an intern for six-months. It was such a rewarding job. There were roughly 12 interns, including myself, taking care of three community gardens E.Y.A. managed in the Downtown Eastside. I learned more about the city I live in, other ways of living and eating, gardening, and how valuable community places are.

Have you found work that's fulfilling and enjoyable?
I definitely have!

Have you found that unschooling has had an impact on how hard or easy it is to get jobs or earn money?
I think it has made finding work easier for me. I only apply for jobs that I have an interest in, or at least a reason for applying, like it helps me save up for a goal. My enthusiasm comes out and I find it increases my likelihood of getting the job.

Do you feel that unschooling has had an impact on what methods of earning money or jobs you're drawn to?
The material I’ve read/found online, like Grace Llewelyn’s The Teenage Liberation handbook, Blake Bole’s College Without High School and his website, Zero Tuition College as well as other unschooling blogs has helped me figure out different ways of doing things in general. It also helped me understand getting a minimum wage job isn’t the only option I have. There are other ways of getting money to do cool things.

What impact do you feel unschooling has had on your life?
It has been an extremely positive one. It has helped me cross that superficial realm in what it means to be an indigenous woman living in modern times. Before all I knew about who I was, where I come from, and what I wanted to be was driven by school and my peers, which is a pretty horrible place to figure out who you are. The main goal of school and mainstream media, especially for First Nations people, is to assimilate us into Western society. After leaving school, I started to become more involved in the community, participating in culture events, and taking an active step in learning my language, territory and politics.


If you could go back in time, is there anything about your learning/educational journey that you'd change?
No, there isn’t anything I’d change, I don’t think I would have as much understanding of how life is without the mistakes and challenges I’ve faced. Even if I might have missed an opportunity because of not doing anything seemingly productive, there is and will always be millions more to come.

If you were to have children, would you choose to unschool them?
Without a doubt, I would never send my children to compulsory schools. It goes against my entire life!

What advice would you give to teens looking to leave high school?
Be gentle on yourself, but be courageous. Listen to the people who question whether you are doing something right or wrong and then move on. Only you can define your life.
Posted by Idzie Desmarais at 2:16 PM